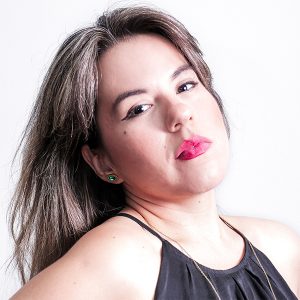 Originally from Guadalajara, Jalisco. She was part of the Municipal Choir of Zapopan and the Choir of the Universidad del Valle de Atemajac, where she began her musical and vocal training. Her talent has taken her to the most important theaters such as the Palacio de Bellas Artes, the Degollado, the Isauro Martinez, among others.

She made her debut in El amor brujo by composer Manuel de Falla, and has subsequently performed the role of the same name in the zarzuela Luisa Fernanda by Moreno Torroba and the Countess of Tripoli in the Mexican opera La Leyenda de Rudel by Ricardo Castro. She recently participated in the recording of La Hija de Rapaccini by Daniel Catán, in a production of the San Diego Opera and the Sociedad Artística Sinaloense, with musical direction by Eduardo Diazmuñoz.

Her musical training and vocal technique have been perfected by leading international opera personalities, such as the famed mezzo-soprano Elīna Garanča, Javier Camarena, Rolando Villazón, Carlos Conde, Aida Bouselma, Nelly Miricioiu, Andrés Sarre, Alfredo Portilla, Guillermo Armada and Carlos Almaguer. He was a member of the Beckmann Foundation's opera program, and is currently a member of the MOS Mexico Opera Studio, under the direction of maestros Alejandro Miyaki and Rennier Piñero.